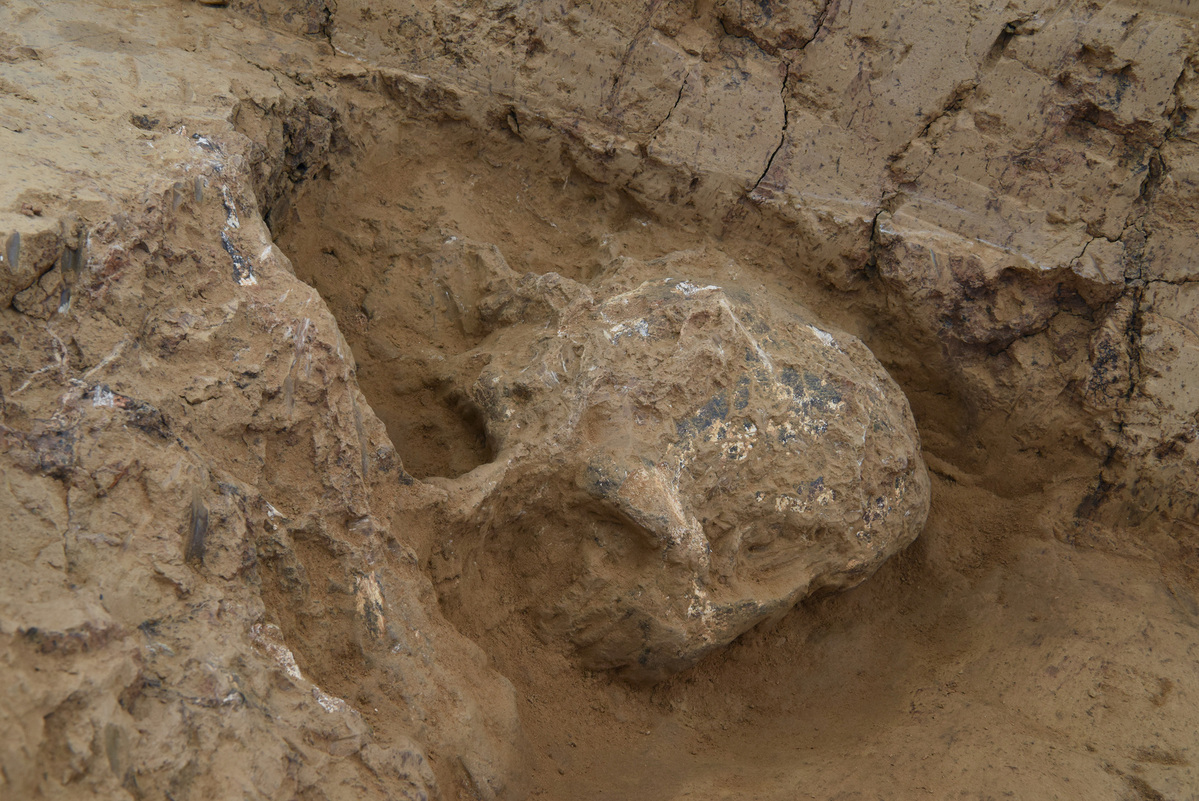 Archaeologists and paleontologists recently discovered a roughly 1-million-year-old human skull fossil in Central China's Hubei province, possibly offering a monumental clue in the study of the evolution of Homo erectus in East Asia, according to a news conference of the National Cultural Heritage Administration in Beijing on Wednesday.

The well-preserved fossil was found on May 18 in an excavation site known as Xuetangliangzi in the city of Shiyan's Yunyang district. Sediment samples have since been extracted for laboratory analysis to assist in dating the fossil, according to Gao Xing, a researcher with the Chinese Academy of Sciences' Institute of Vertebrate Paleontology and Paleoanthropology.

The skull has not been fully excavated from the ground yet, but the part that has been exposed so far, including the frontal bone, eye sockets and left cheekbone and temporal bone, indicate that the skull's structure is intact.

"No obvious deformation has been found. It is in very good condition and features the typical characteristics of Homo erectus," Gao said, referring to an extinct species of the human genus that is perhaps an ancestor of modern humans.

The Xuetangliangzi site is famous for a milestone discovery of two hominid crania, in 1989 and 1990. The two fossils, dating from 800,000 to 1.1 million years ago, were named by scientists the No 1 and No 2 skulls of Yunxian Man (Yunyang district was then known as Yunxian county). However, when unearthed, the two fossils were found to be severely deformed.

Consequently, the finding of an apparently intact cranium — named the No 3 skull of Yunxian Man — has been met with excitement and a new round of research on the Xuetangliangzi site.

The ongoing excavation was jointly launched last year by the Institute of Vertebrate Paleontology and Paleoanthropology and the Hubei Provincial Institute of Cultural Relics and Archaeology.

According to Gao, the No 3 skull was buried about 62 centimeters below the current ground surface and was about 35 meters away from the previous two.

"Their buried environments are similar, and so are the varieties of other unearthed animal bones and lithic (stone) tools," he said. "Preliminary studies showed that the No 3 skull should belong to the same period of time as the No 1 and No 2."

If so, the finding could be the best-preserved skull fossil of Homo erectus from around 1 million years ago ever found in the hinterland of the Eurasian region, the researcher said.

"We'll use different technical approaches, including geomagnetic, optical and cosmogenic nuclides dating methods," Gao said. "It will take at least another half a year to make a scientific judgment. Dating will not only focus on the skull, but also spread across the whole site to get a more reliable reference.

"Thanks to more advanced technologies, I hope we can narrow the time span of our speculation this time," he said.

New technologies can benefit not only the dating process but also other research involving the site. For example, 3D virtual imaging is used to reconstruct the environment in which Yunxian Man lived. In addition, a new, comprehensive 3D image of the working field will be done once excavation goes an additional 2 centimeters deeper.

"Traditionally, archaeological fieldwork is irreversible," Gao said. "But thanks to new technology, we want to make part of our working process reversible by working in the digital world."

All sediments found in the working area will be taken to a lab for long-term studies that will also involve environmental sciences, geology, molecular biology and other branches of natural science.

"Our current findings have shown that human evolution in East Asia was continuous," Gao said. "The links between Homo erectus and later Homo sapiens are still unclear, but this issue is a key to decoding the origins of modern human beings in East Asia. Indisputably, the skull fossil can provide crucial evidence."

Wang Ru contributed to this story.